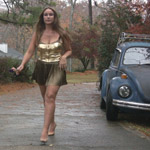 Vassanta has a date and the Bug doesn’t want to start.  It’s rainy and the points are probably damp.  She tries her luck with the Bus and fortunately for her (unfortunately for the Bus) it starts.  She proceeds to rev it hard to take out some of the frustration of the Bug not starting.  She revs it in her tan stiletto pumps and barefoot.  After some revving, she thinks about how cumbersome it’ll be to drive the Bus on the wet roads and opts to go try the Bug again.