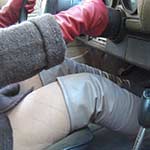 Vassanta walks down the steps, turns around at the Camaro and asks you for the keys. She wants to crank your car! You place the keys in her gloved hands and get in the passenger seat. She gets in, puts key in the ignition and turns it while giving it some gas. It turns over slow on this cold morning and doesn’t sputter for the first handful of tries. It almost sounds like the battery is about to give out but it sputters some and maybe….maybe?! Nope!
She gets out of the car and apologizes for killing it but hey, there’s always the Bug. She gets the keys for the Bug from her purse and goes over to try and get it started. Bouncing away while you look on, she tries and tries but it seems like the Bug is giving her the middle finger also. At the end of the clip, she looks at you through the front windshield and apologizes for killing the cars today.

One Response to Vassanta Cold Cranking Camaro & Bug in Gray Boots, 1 of 2