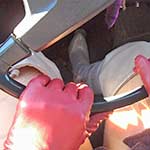 She’s having a hard time with the Bug too! She already got the middle-finger from the Camaro and now it looks like the Bug is just going to mock her…ugh!! She’s cranking away on it and after some struggling, she gets it fired up, YAY! She revs pretty hard as payback for it being a dickhead. But she takes her foot off the gas to let it idle and the rpm’s drop too far and it conks out. She struggles again for a bit to get it restarted and a shot of the exhaust while she’s cranking it reveals a little pool of gas on the ground from where she’s pumped it too much and flooded it. She does get it restarted again and is revving it some more but she makes the same mistake to see if it’ll idle before it’s ready and it dies again.

One thought on “Vassanta Cold Cranking Camaro & Bug in Gray Boots, 2 of 2”