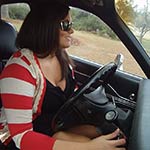 This is a clip of Veronica that is filmed from a dash mounted camera only.  She’s trying to get the Coronet started and manages to fire it up a time or two to a few romps of the gas pedal but the car keeps stalling.

One thought on “Veronica Cranking the Coronet (no feet shots)”