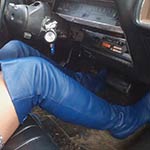 Veronica is one of our tallest models and is nothing but legs!  When she sits in the Coronet, even with the seat all the way back, she could still use some more room to stretch her legs out.  She has on a pair of blue leather boots and pumps the gas pedal with her size 10 feet.  The Coronet needs some hard motivation to get started and she gives it to the car.  She gets it started and we drive off.  She maneuvers the car around the curvy roads with her leather gloved hands on the steering wheel.  The trip is mostly uneventful except when the car as she pulled out in front of oncoming traffic.  Veronica froze up a bit so Shish had to quickly tell her what to do…sorry about that! :p  How often do you get to tell a girl to “Punch it!!” in a pair of sweet leather boots!