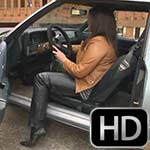 She does some pedal pumping in the old Volvo and Monte Carlo on this chilly day while sporting a sexy leather outfit.  The Volvo doesn’t start for her and the Monte Carlo gives her all kinds of trouble.  Weak batteries, stalling, warm-up style revving, exhaust shots and flexing of the thighs while pumping the pedals are in this clip.  Enjoy!