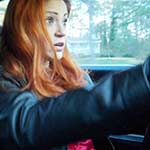 The Scenario:
“Vivian bought a house that someone wants because its incriminating to them if remodeled so they decide to cut her brakes to get rid of her. We then see her going out to her car and driving off leaving brake fluid behind. As she drives her brakes get mushy and eventually give out…no brakes! After futile attempts to stop her car by pumping the brakes and having no emergency brake she finally turns the car off to stop. She gets out to see fluid and wonders if her brake line was cut. She gets back in her car and calls for assistance, pumping her brake the entire time. She then waits, pumping the brake being very vocal about her brakes…what happened to her brakes, were they tampered with….does someone want her dead?”