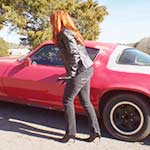 Vivian finds herself in a precarious situation when she’s driving her Camaro and the brakes go out because someone tampered with her lines.  Will she stop?  Will she DIEEEE?!?!