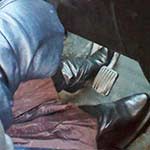 Vivian is one of those models I have the pleasure of shooting a couple of times a year. But because the time between each shoot is months, early on she would often need a refresher on each car. Each car has it’s quirks and the way a car behaved when she was here 6 months prior is not often the way it’s behaving now. So this is another one of those ‘PTP 101-Refresher’ clips where we are chatting about the cars and things to remember while she’s trying to get the Volvo start on this cold day.