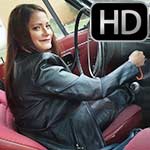 Vivian Cranking the Volvo in All Leather – #1057 Leftover Scenes

These are some extra scenes that didn’t make it into the final cut of custom #1057. We were tweaking the car for it’s upcoming ‘performance’, so there is a little dialogue between us as she cranks the car, pumps it with her leather boots and then cranks the car more when I told her to move it to a different spot. The pedal comes off too because it’s wore out from all the years of all the pumping!