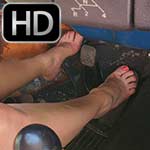 The old Bug is having some kind of issue and won’t start. She tried starting it last night to move it into a parking spot (another video) but it wouldn’t start. So, she thought to let it sit overnight and try it again it again today but nope, still won’t start…well, it’ll kinda start but runs like a turd for a a little bit before stalling out.
She’s wearing open-toed sandals at first then kicks them off because it’s easier to work the pedals with her bare feet.