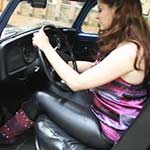 Vivian Ireene Pierce vs The Bug

She’s having issues with her old Bug and is having to resort to using the charger to try and get it started.  Even with the charger, it’s still weak and doesn’t want to start for her.  She keeps fiddling with the connection and her frustration is obvious.  Poor Vivian!  All dressed up and her car won’t start! 🙁

One thought on “Vivian Ireene Pierce vs The Bug”