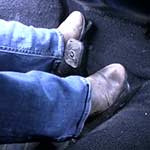 It’s cold and overcast, so Vivian is bundled up in her long, tan peacoat with some brown gloves and a warm hat. She’s wearing some casual boots under her jeans. She gets in the car, gets situated by gripping the gear selector with her leather gloves to find neutral and removes the parking brake so she can let the car roll to a flat spot before trying to get it started.
While she’s doing all of this, you’re intently watching her and she catches notice of this. She asks, “You like it when I press the pedals? How about when I use both feet? When I crank it?”
She tries starting the car but it doesn’t start and she wonders if you like the sound it makes when it doesn’t start…but she knows your answer already, you don’t have to say anything. Since the car isn’t starting and you’re enjoying the show, she decides to have fun with it and keep teasing you while she tries to get the car started.