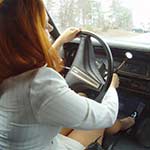 She ran out of gas again…dammit!  She’s arriving back at the car after a long walk with her little gas can.  She empties the container into the old Coronet, hoping that it’s enough to get her to the gas station.  She slides in behind the wheel and starts spinning the motor over and pumping that gas pedal….nothing.  She tries again…nothing!  She keeps trying but isn’t getting a response from the car.  She takes a break to send out an S.O.S for help but gets no response!  She tries starting it some more times with her stocking-covered bare feet and just as all hope is about to be lost, it sputters and fires up!!