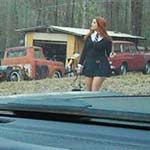 Someone is sabotaging Vivian’s car. We see them raise the hood, stuff a rag in the carb and scurry off just before Vivian is seen walking to the car. We watch her walk over to the car from inside and she gets in, gets situated, slides the key in and turns the engine over. She doesn’t hold it long because she expects it to start right up. She tries it a couple of more times holding the key slightly longer but not pumping the gas yet. She’s puzzled at why it won’t start and starts pumping the gas now to help the engine start. She tries for a while before sitting back and shooting Madalynn Raye a message for help. Ironically, Madalynn is having car trouble too. So Vivian sends a text to Jimmy for help.
After a few more moments, she tries starting the car again but it’s still not starting. She kicks off her Chinese slippers and rubs her feet together. Then she starts cranking the car in just her pantyhose covered feet. She’s begging the car to start and things are looking very bad for her until she gets a call from Jimmy who is going to come save her!

One thought on “Vivian Ireene Pierce Cranking the Coronet – #567”