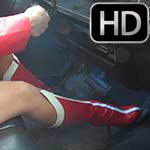 Vivian is helping out at little Billy’s school for the Halloween party this year.  She’s changed into her Wonder Vivian costume and Billy is already in the car, where we see Vivian walk across the yard to get into the old, cold Dodge.  She tells Billy to buckle up and proceeds to start the car.  It doesn’t catch the first two times and Vivian asks Billy if she should pump the gas.
Of course he nods and she gives it some gas, turns the key and pumps while it’s spinning over but it’s still not starting.  She reassures Billy that she can get it started but he doesn’t seem to care.
When it looks like it isn’t going to start at all, she texts to see if Madalynn Raye can swing by and get her.  Unfortunately, Maddy is still at work. 🙁   But Maddy does suggest for Vivian to take her boots off and trying starting it by pumping the gas pedal in her bare, stocking-clad feet.  She tries but the damn thing still won’t start!!  Oh no, someone is coming across the yard….she starts getting frantic, not sure who it could be and they’re wearing a mask…shit!..start!!!  Oh GOD–oh, it’s just Jimmy…*whew*

One thought on “Vivian Ireene Pierce Cranking the Coronet – #568”