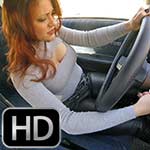 Vivian cranks the Monte Carlo in a pair of tight leather pants, a sexy sweater and these sparkly strappy sandals. You get to watch from the passenger side, her point-of-view and from the front windshield as she begs and pleads for the car to start for her. She drains the battery completely at the end and gets startled by some stranger passing by that bangs on her hood.