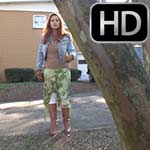 Vivian is subbing at the school today.  She’s walking to the Jeep as little Billy is peeking at her from behind a tree.  She gets in the car and can’t get it started.  She cranks it a bunch, knowing that on cold days it can be stubborn but it’s taking way too long this morning.  Her frustration is building since she’s going to be late now and while taking a pause from to cranking to give the car a moment, she looks in her rear-view mirror to check herself and that’s when she sees someone behind her!  She whips her head around and yeah, Billy is busted!!