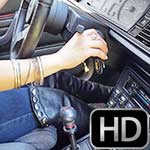 The Renault wins this battle today. Vivian isn’t able to get it started so she can go out. She begs and begs but the car doesn’t care. All she’s supposed to do is pump it before turning the key to prime the carburetor and it usually starts up. She repeats this process over and over but the car isn’t responding. Might be time to take it to the shop. :/
She’s wearing a yellow low-cut top, tight jeans and black pointy stiletto boots.