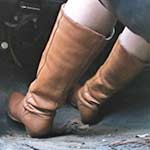 She’s trying to go out but the battery in the Blazer is dead.  She has the charger handy to give it some juice as she spends the next 5+ minutes trying to get the car started.  Lots of weak battery cranking and cranking without pumping by request.  There is a lot of pumping while cranking as well. 🙂