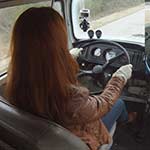 The Bus is being stubborn as Vivian tries getting it started. When it finally fires up, she revs it up to clear it out and then turns the big Bus around and hits the road. The first stop sign she comes to, it stalls out on her but she gets it going again and drives the rest of the trip keeping the rpm’s high, maybe as punishment for being uncooperative.