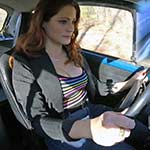 She’s dressed up and looking sexy wearing her tight jeans, tight tank-top, black blazer and shiny black peep-toe high heels. There’s a camera on her body and one on her feet as she drives the little Bug around.