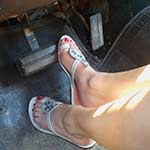 Vivian Ireene Pierce Filming Herself Driving the Coronet in Sandals

She’s out cruising around for a bit and took the little camera with her to film it.  You watch, from her point of view, her working the pedals in the big land barge.  Lots of gas and braking as she hits red lights, stop signs and traffic.  She even stalls the car out twice, with the second one forcing her to tell people to go around her because she stalled it.  You can hear her apologize for the congestion…oops!