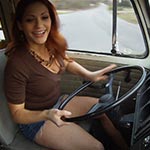 She’s winding out the bus and working those pedals in her bare feet.  She sometimes finds it hard to go into 2nd gear and grinds a bit but once in gear, she gets on the gas!  She’s a bit short and it’s cute watching her have to stretch her feet to floor the gas and clutch.  Her little skirt has also gotten a bit shorter from all the leg work. 🙂

This is a picture-in-picture setup with the main camera on her full body and the footcam feed in the upper right.