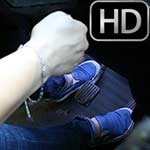 It’s a rough morning after partying it up last night. You’re in the car already, about to doze off when Vivian shows up, feeling just as wore out. Adjusting the seat is a struggle but she’s okay, she’s got this…except the car is having a case of the ‘Mondays’. It’s going to be a rough ride to work…

One thought on “Vivian Ireene Pierce Cranks & Drives the Volvo – #494”