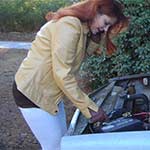 Vivian’s Volvo Car Troubles On Way to Lunch, 1 of 2

She’s on the phone as she’s walking out to the car, talking with her friend about their lunch plans.  The car doesn’t start up right away but that isn’t uncommon on a cold day.  She has to take the old Volvo because her man needed the good car for a business trip.  She’s cold and wants to get the car started so she wraps up her conversation so she can focus on cranking the car up.  She ends up killing the battery and has to call for help on how to change it.  Once that is done, it looks like she might have kicked this problem in the butt…

2 thoughts on “Vivian’s Volvo Car Troubles On Way to Lunch, 1 of 2”