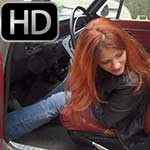 Vivian’s Startup & Warmup of the Volvo in Gray Boots

A casual video of Vivian starting up the old Volvo and getting it warmed up on this very overcast day. She’s wearing a black leather jacket, gray gloves, jeans and gray cowgirl boots. There is dialogue between us.