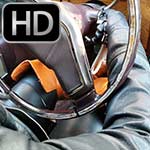 Some guys are cutting wood at the land we’re using to store our cars. So there’s about 4 guys, who have no idea who we are, just behind us. I guess they figured we’re legit since we do have the keys to the cars there. They go about their business until they see Vivian come strutting out, decked in leather outfit and orange boots. They were probably thinking that this girl has no idea what the hell she’s doing but she shows them pretty quickly that she’s got it under control.

The Cadillac was having carburetor issues during this time and would sometimes start and sometimes not start at all. It was sometimes luck. She keeps cranking the car till it finally starts up but it toys with her and stalls out. When it is running, it’s pretty rough and shakes the car. She revs it to try and clear it out some to see if it will then idle on it’s own. It takes a while for it to finally idle smoothly but with all the pedal playing and teasing it took to get there makes it well worth it.

3 thoughts on “Vivian Cranks the Stubborn Caddy Near Loggers”