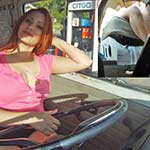 Some folks seem to try and dictate that a ‘real’ pedal pumping clip is all serious business.  Bah, that’s horseshit and we’ve proven it over the years with the numerous clips that capture the light-hearted side of filming this stuff.  Lots of times, I keep the cameras rolling because you never know what you’re gonna get, as Forrest Gump’s momma always said, so why miss an opportunity?  I love working with Vivian for many reasons but one reason is because she’s just so dang fun to pick on!  She’s laying on the sexy pumping in the beginning and when the VW starts up pretty easily, I make her do it again…since when is easy starting vehicles fun??  From there, the video just takes a life of it’s own but you’ve got a great picture-in-picture video of Vivian’s red hair, that killer cleavage (sorry Viv, it’s just…well, there!), them itty bitty shorts and her sexy little feet!