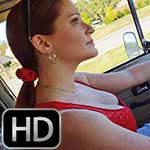 Vivian gets the old 1971 VW Bus fired up and out of the garage to take it for a spin to get the cobwebs off of it. She drives with her red leather ballet flats on for some of the time and also with just her bare feet with red toes.