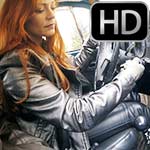 Heading out and she’s all dressed up to fight the damp and cold weather today. A black leather jacket, black leather pants, gray vintage boots and 2 pairs of gloves. The old Bug is cranky and dies often as she drives around. This video is filmed from just a passenger seat view at first and then changes to a pip-view later with the passenger seat view being the small screen and a front windshield mounted camera as the main view.

One thought on “Vivian Crankin & Drivin the VW Bug in Leather, Boots & Gloves”