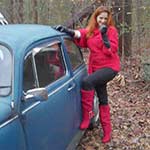 Vivian Ireene Pierce Being a Cranking Tease in the Bug

She’s waiting by the Bug, ready to try and start that old thing just for you.  She’s got her fancy red stiletto boots on that match her sweater along with some black leather gloves.  She dangles the key at you and gets in behind the wheel while you walk over.  Before she turns the key, she softly tells you to watch her feet and you eagerly comply.  She pumps that gas pedal in those boots and spins the engine over…thus begins this super sexy flooding-tease video.