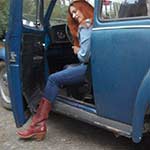 She wants you to follow her to the Bug so she can give you a sweet-N-sexy pedal pumping show!  Of course, the Bug won’t start…did she flood it intentionally?…is it really being hard to start on it’s own?….who cares?!  She keeps trying and is enjoying the attention you’re giving her as she’s trying hard to get the car started.  You take a peek at the exhaust as she cranks it, watching the puffs of exhaust come out as the engine is turning over.  Not long after, the car starts to sputter a bit!  Is that life coming from the engine?! She keeps cranking it and finally gets the engine running and you look back at the exhaust and streams of white smoke are shooting out of the dual pipes!  YES!!!  She romps on it, clearing all that gas that has flooded the chambers…spit that crap out!

**Turn the brightness up a tad on your player.**