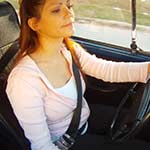 Vivian Ireene Pierce Goes to Store in the Bug in Sneakers

It takes her about 3 minutes to get this damn little car started…3 minutes of frustrated, flooded cranking before she revs it up to clear it out and takes off!  She drives to the store and then home with you watching her feet work the pedals and her lovely face at the same time.