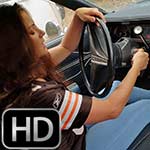 Heading back to the house in the Coronet. It takes a while for Vivian to get it started. Her white Reebok princess sneakers pump the gas pedal over and over. Some sputtering before it finally starts and she gives it some good, hard revs before heading out. She stalls it at the stop sign…oops!

One thought on “Vivian Pumps the Coronet in Browns Jersey & Reeboks”