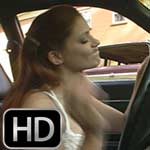 Vivian Struggles with the Coronet – #348

The Scenario:
“Very casual. Vivian is trying to move some cars in the driveway. That is they would cooperate with her. She struggles to get the car started. When it does start, it keeps stalling as she maneuvers the car. She is hoping that she doesn’t flood the engine but ends up doing so. She tells the car to “come on” and comments about smelling gas and such. The car gives her so much trouble that she eventually has to give up. “