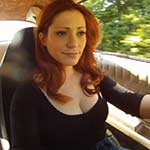 She cranks up the stubborn Camaro and drives it for a bit in her ballet flats before kicking them off to drive barefoot for the remainder of the trip.