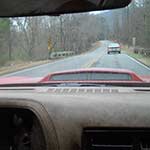 She’s heading to work on a dreary morning.  She’s wearing her conservative business suit (fan submitted) with some sexy, over-the-knee boots and a pair of black leather gloves.  She fires up the old 77 Z28 and revs it up nice and loud to get it (and you) warmed up!  She then hits the road, aggressively driving her route to work.  Flooring it when she can, kicking the automatic transmission down a gear to get up to speed quickly.  She even puts it in neutral to rev it up while she’s coasting.  This car makes her morning commute worth it!

**Thanks to the fan for submitting this outfit for Vivian and our other models to wear!**