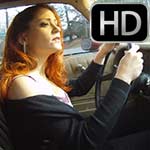 Vivian uses her old Camaro as a taxi service to make some extra money.  You’ve called her to come pick you up and you’re waiting outside as she comes whipping into your driveway.  The car conks out just as you’re getting in and she apologizes for being late as she starts it back up.  Apparently it’s been giving her issues lately and you find out just how bad those issues are when it conks out again as she backs up.  This time, it takes some struggling for her to get it started.  You finally arrive at your destination and she asks for an extra tip to put towards her ‘car fund’.  You agree and as you’re walking away, her car stalls out again…

2 thoughts on “Vivian Ireene Pierce is Your Taxi Service – #422”