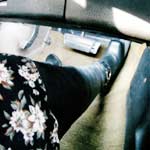 Today, you’re getting a ride home from your teacher, Vivian.  You’ve always fantasized as to how much car trouble she has or how she might drive the old Camaro on her way to/from work.  Today, you get to witness it first hand.  You’re already in the passenger seat as she comes out looking for you.  She gets in the car and your excitement is building as she gets situated behind the wheel.  Just before she turns the key, she gives the engine 2 gentle pumps of the gas and spins the motor over….from there, your dream becomes a reality!