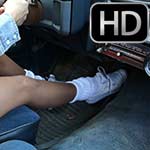 This clip is of Vivian driving to and from the location that we shot this custom. She’s driving in sheer pantyhose, thick white socks and white Reebok sneakers. When the custom is done, she puts her shoes back on and has some trouble getting the car started. She gets it fired up eventually and heads back to the house.
*Excuse the small dead space and outtake clip attached at the end of this video. Unless you like my version of Star Trek: The Next Generation’s theme song. lol*