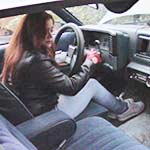 Vivian Gives You a Fast Ride in Reebok Princess Sneakers

Vivian offered to give you a ride home and you’re out in the car waiting for her when the video fades in. She opens the door and gets in. She’s wearing a black leather jacket, red driving gloves, light colored denim jeans and white Reebok Princess sneakers. She mentions that she hopes she can get her car to start because it’s beginning to ice over. She slides the key in, gives the gas a few pumps turns they key…it doesn’t start.
No biggie, it always takes a couple of tries to get going and she tries again…and again…and again…“Come on baby, start.” …and now the battery is starting to get weak…“Come oooonnn…”
She has you look under the hood before the battery dies completely, hoping you can do something. While standing outside, you watch her crank the car a few more times and it finally fires up! Some white smoke billows out of the exhaust at first as she revs it up to clear out the engine and get some juice back into the battery.
Now she’s finally ready to go and backs the car up, turns it around and heads to the road. Once she gets on the road, she puts the pedal to the floor and tries making it to your house in record time! Lots of on-and-off the gas as she navigates the narrow, curvy roads in this old car. She’s having fun with it too!