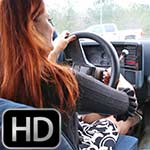 Vivian Late Picking You Up Because of Car Trouble

You come walking down the sidewalk to see Vivian waiting in the empty parking lot by her old Monte Carlo.
“Hey, did you have a good day at school? I’m sorry I’m late but you know how the car has been running today.” she says as she walks you around to the passenger side to let you in and get you situated. She walks back to the drivers side, gets in, buckles up and asks, “You hungry? You have to be from being at school all day. Let’s go get something to eat.” and turns the key to start the engine. She quickly pumps the gas pedal as the engine is turning over but it doesn’t start. She tries a few more times, still quickly pumping the gas in her open toe black-and-white stiletto heels.
“It’s okay, I’ll get it. I’ve been dealing with it all day.” she tells you, as if that is supposed to reassure you. She keeps trying to start the car, pumping with a bit more force now as she’s getting frustrated. She also holds the pedal down to the floor to see if that will help.
After a while, she gets it started and it looks like you’re on your way but as she is pulling out of the parking area the car stalls on her again. Right there in front of the other parents leaving too. They’ve got nice cars that probably don’t break down on them while Vivian is driving this old clunker that she can’t get started!! So embarrassing!!