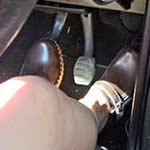 If she can get the old little car started, she can take it for a drive. She’s wearing brown clogs with black thigh high stockings and a sexy little school-girl outfit. She pumps the skinny gas pedal in her clogs till the car hesitantly fires up. She revs it some to clear it out and carefully backs out of the parking spot and heads down the driveway to go for a drive. The car sounds rough and needs a good stretching of it’s legs. She has fun driving this little car on these curvy roads.

One thought on “Vivian Schoolgirl Outfit & Brown Clogs in the Renault”