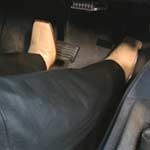 Vivian Ireene Pierce Has Some Carpooling Issues, 2 of 2

It’s Vivian’s turn to drive today for her carpooling schedule.  Her neighbor has arrived and is with her as she starts the process of getting the Blazer started.  She can tell that her passenger is getting a bit nervous that her car isn’t starting but she reassures him that it’s no big deal, it happens all the time.  After a while of the Blazer really not starting, Vivian begins to worry some herself.  She does get it running and now finds out that her wheels are spinning as she’s trying to back up out of her parking spot….damn it!

One thought on “Vivian Ireene Pierce Has Some Carpooling Issues, 2 of 2”