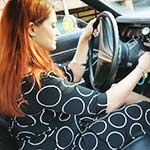 Gotta get the old Dodge Coronet fired up to run it down the street and swap it out for the Camaro. The Coronet is stubborn but Vivian is persistent. She backs it up into the street and drives down to where the Camaro is.
The Camaro starts up pretty easy for her and she moves it so she can park the Coronet where it was and then drives back up the street in the Camaro.