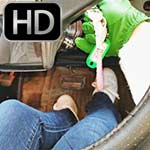 She’s got this cute little nerdy look going on with her hoodie, glasses, jeans and white leather Adidas sneakers with green stripes. She also found the perfect pair of leather driving gloves to go with the shoes as they are the perfect shade of green to match the stripes on her sneakers…score!
She has to swap out the Monte Carlo with the Jeep, so this video is of her cranking the Monte Carlo and the Jeep for their first start of the day…which is never easy. This video is filmed some from the passenger side and some from her point-of-view.