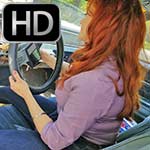 For years, before we had all of our cars in one location, we would have to swap them out by driving to where we were keeping them parked/stored. This resulted in a lot of time that would of normally been wasted if I didn’t always film it. You never know what is going to happen or how the cars are going to behave. Sometimes, it’s a wild adventure and sometimes it’s just a normal thing with little issue.
Vivian is taking the Jeep down the road to get the Monte Carlo to use for some videos. She gets the Jeep started right up (dammit!), backs out the drive way and heads over to the Monte. Once there, she gets in the Monte Carlo, leaves her left foot on the ground while she cranks the car but damn, the metal of the ignition is very hot to the touch from sitting in the sun! She tries it twice and the car doesn’t start, so she grabs a tissue from her purse and tries again. The Monte is much more stubborn than the Jeep (maybe it has allergies from all the pollen? lol) but after some work, she gets it to stay running. She drives back to the house where she ends the video with some revving.