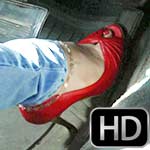 Vivian thinks she’s taking the Bug out for a fun little drive but as she gets to it, you hold up and dangle the keys to the Monte Carlo. She doesn’t want to take the Monte, she wants to have fun and drive her little VW. But you insist and she complies, reluctantly. She takes the keys to the Chevy from your hand and gets in the car. Of course, the piece of junk won’t crank. You get in the backseat and she keeps trying to get it started while looking back at you. Maybe she’s hoping her sad puppy dog eyes will convince you to let her take the Bug but nope, you insist on the Monte Carlo…and she complies.
After minutes of trying with no luck in getting the car started and not able to sway you on taking the Bug, Vivian realizes she still has the keys to the Bug and tells you she’s taking the Bug. She gets out, walks up to the Bug while you’re still sitting in the Monte Carlo. She does a little sexy shimmy-n-shake to coax you out of the Monte Carlo and into the Bug but you’re being stubborn…or maybe you just like the show.
The clip ends with her getting into the Bug and shutting the door while you’re still in the Monte Carlo.

One thought on “Vivian Ireene Pierce Red Peep Toe Tease in the Bug, 1 of 4”