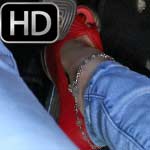 She’s in the Bug and trying to get it started while you’re still in the Monte Carlo, waiting to see if she’ll come back to it. She’s not able to get the Bug started and you walk up to the drivers side to watch her keep trying. She’s begging the car to start for her and looking at you with that pouty-face…“It’ll start…come on baby, start for me.”
When she does finally get it fired up, smoke shoots out of the exhaust as she clears out the engine with some good romping of the gas pedal. Now she’s having fun! You get in and she mashes that pedal down while driving around, making that little air-cooled engine scream!

One thought on “Vivian Ireene Pierce Red Peep Toe Tease in the Bug, 2 of 4”